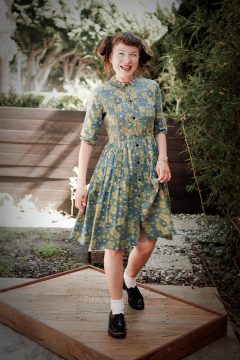 When I first met Rebecca Stout in Pasadena she was covered in dirt standing between a goat and chicken, and she had a purple ribbon pinned to her dress. It was a May evening in 2014 and my old-time group, the G Burns Jug Band, had just arrived for a gig at the Urban Homestead, a one-acre farming operation (complete with livestock), and a sometimes concert venue improbably tucked away in the middle of the Los Angeles megalopolis. The legendary Topanga Banjo and Fiddle Contest had wrapped up earlier in the day, and though I couldn’t make it, it was easy to spot those in the audience who had spent the first half of their day in the dry and dusty mountain town to the west. With her gentle Georgian accent, she introduced herself as a flatfoot dancer and asked if she could dance to our music. I figured anyone that could churn up that much dust must be one hell of a dancer, so of course I said “yes.” Plus, they don’t just hand out those contest ribbons. Clearly, she earned it. From one end of our hour-long set to the other, she stomped, spun, slid, clapped, hollered, laughed, and made the night twice what it would have been without her. So began a relationship with one of my favorite musical collaborators. I’ve had the pleasure of seeing her dance many times since then. Each time I learn a little more of the story of this remarkable style of dance and become more enamored with its history.

Rebecca’s style of dance might not be as well-known as other styles of southern dance. Flatfoot is one branch in the large tree of traditional southern dance that can often be confused with or referred to with other styles like buckdancing, clogging, hoedowning. A few things make flatfooting stand out: most important, this is not a partner dance like the square dances, line dances, or contra dances. It doesn’t involve groups of dancers with choreography that’s been shared and rehearsed like you see with clogging. Flatfooting is a highly individualistic, improvisatory dance. It’s intended to be percussive and musical, so flatfooting is traditionally performed on a wooden floor or on planks with hard-soled shoes. Today, most dancers like Rebecca travel with a portable wooden platform, or a “stomp box” as I like to call them.

Like the “old-time music” that it typically accompanies, flatfoot dance was formed in the Deep South and Appalachian regions roughly between the Revolutionary and Civil Wars. It combined traditions of Scots-Irish settlers and African-American slaves as well as Native American and continental European influences. Scots-Irish settlers brought to these areas percussive dance steps balanced on the balls of the feet, a tendency still evident in Irish sean-nós (old time) dance. African dance steps were less percussive and often employed dragging, sliding, or shuffling steps balanced on the heels of the feet. This tendency is still visible in other dance contexts like the “electric slide,” which also originated in African-American communities.

These dance cultures met and reshaped one another in the agrarian communities of the south. Slaves were often present for the social dances of whites and often provided the music. Irish music scholar David Cooper has suggested that at the time of America’s founding, as many as half of the country’s fiddlers were black1. They played the jig and hornpipe and cotillion dances that white people preferred, and, afterward, amongst themselves, they could mimic and alter the dances steps of whites at their own dance gatherings, called “frolics.” Similarly, whites would observe, become fascinated with, and imitate the dance steps of blacks, completing a loop of cultural transmission, albeit a very lop-sided one. Through this loop, those jig and hornpipe and cotillion dances of Europe became the hoe-downs and break-downs of America.

This loop produced numerous styles of dance and music that spread across the South, beyond plantations and into more remote and mountainous terrain of the Appalachian mountains where they have persisted into the present time. They survived as part of an older musical paradigm which served a family and community by valuing participation over performance. If it was time to make music and you could play an instrument, you did. If you could sing, you did. If you couldn’t, you danced. If you couldn’t do any of that, you’d start eefing (Google it). Music was no passive affair, but something to involve yourself in. To my mind, the specialness of flatfoot dance is that you involve your entire self, your entire body, in the music. I’m used to making music by sitting in a chair and wiggling my fingers around an instrument, but when someone dances, they’re heaving their entire body in harmony with sound. They’re not just listening to the band and expressing themselves, they’re reacting and contributing to the sound. A hard stomp at just the right time will make a whole room sing and inspire the band to play even harder. Flatfoot dance is the human body made musical, and it’s beautiful.

Born in the small town of Cordele, Georgia, Rebecca Stout witnessed this heritage of communal song and dance from a young age. On Friday nights, her mother would take her to the local VFW (Veterans of Foreign Wars) club for live music and group dancing, “They had a big wooden dance floor and would dance old circle dances and teach clogging steps and we’d dance to tunes like ‘Cotton-Eyed Joe.’” She characterized those nights as simply “social nights” where music and dance were opportunities for the community to come together and feel connected.

It was a valuable lesson about the power of music that Rebecca carried with her through a youth shaped by constant motion. Her father worked in the fruit shipping industry, a job that required the family to move across the South year after year. Music and dance formed a powerful bond in her family and was a stabilizing force in her personal identity. “My mom and I had a singing duo from the time I was six. She’d take me around to these southern festivals and there were singing competitions, and I’d back her up singing harmony on all of these honky tonk duets. Or we’d visit campgrounds and sing and then I’d walk around collecting quarters in a milk jug.”

Through all of the motion, Rebecca repeatedly found herself in the midst of legendary musicians and dancers like Thomas Maupin of Murfreesboro, Tennessee. Even though he was a six-time national championship dancer, “It was one of those things that you didn’t really pay attention to just because I was young and it was part of the woodwork.” She didn’t have to swoon and ogle over these legends of old-time music and dance for their influence to seep in however, and soon enough she was seeking them out very deliberately. After leaving home, she travelled to folk retreats across the country to study with modern masters and refine her own understanding of flatfoot dance tradition.

After moving to Los Angeles to advance a recording career that had begun in Nashville, Rebecca began establishing herself as a valued teacher of the many traditional music skills she had picked up through her travels. In doing so, she confronted one of the fundamental challenges of teaching flatfoot dance: because it is such an individualistic form, and because it is improvisatory by nature, there isn’t much of a consensus amongst dancers concerning its terminology or pedagogy. In other words: there wasn’t a common language of flatfoot dance. Other styles like clogging require coordinated moves within a group, and long ago this compelled cloggers to settle on a taxonomy of moves and methods of teaching group dance. In the latter twentieth century, numerous clogging associations worked to organize a national competitive scene which further “standardized” the form, making it easier to share and educate newcomers.

The flatfoot world by comparison lacked such resources for spreading their art. Early in her teaching career, Rebecca sought to work through this challenge with the production of an instructional DVD which offered a framework for introducing the fundamentals of flatfoot dance. The need for such a teaching resource, and the quality of her work was so great that it was quickly included in the International Bluegrass Music Museum in Owensboro, Kentucky. There it was displayed alongside artifacts from legends of traditional and country music like Maybelle Carter’s autoharp.

The city of San Diego is lucky to have Rebecca in concert this month at the Kalabash School of Music and the Arts in Bird Rock. On March 11th, she’ll perform alongside fiddler and ethnomusicologist Molly White and guitarist Steve Werner, and—ahem—me on banjo. The following morning of March 12th she’ll be hosting workshops on flatfoot dance and traditional harmony singing. Both workshops are designed with beginners in mind. For more information on these shows, visit http://kalabasharts.com/events . For more information on Rebecca Sout, visit her website at https://flatfootandfancyfree.com

Clinton Davis, PhD, is a freelance musician and educator, raised in Kentucky and based in San Diego. You can hear him play around town solo or with his award-winning group G Burns Jug Band around town. For more information visit http://clintonrossdavis.com