“Daddy was a trash talking truck driver.
Mama sang praises to the lord.” 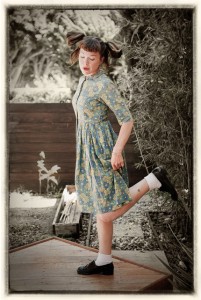 No, this isn’t the beginning of your standard country-western tearjerker. It’s Rebecca Stout talking about her life as a child growing up in the Deep South.
“There was never a question that I would sing and dance,” says Rebecca. “In my family, it was about the same as breathing air or drinking water.”

As the middle of seven children who all sang and played instruments, Rebecca learned early on that clogging, singing and flatfoot dancing were great parlor tricks for garnering the extra attention so hard to come by in a big family. By age six, she was performing on stage, singing alongside her singer/songwriter mother at music festivals, V.F.W. Dance Halls and R.V. Campground tourist traps throughout Alabama, Georgia, Kentucky and Tennessee. “It was always my job to do a little buck-dance routine in the middle of the show,” says Rebecca. “Then go out and collect tips from the audience with a milk jug.”

Her early dance training began in rural Georgia when her mother signed her up for clogging classes with a local “club” called The Dixieland Cloggers. when the family moved to Tennessee the following year, she continued her lessons with Sumner County’s Corn Crib Cloggers and graduated from her first course in 1983 with an official diploma from the College of Double Toe, Double Toe, Toe, Stomp! and, became a “Bachelor of Clogging”.

By the time she was 14, Rebecca’s official clogging days had ended and her love affair with traditional Appalachian flatfoot had begun. “In the South, clogging is considered a precision, competition sport,” says Rebecca. “I wasn’t interested in competition; I just wanted to dance and have fun with the band!”

Rebecca discovered that taking off her jingle taps and donning simple, hard-soled “Sunday shoes” elicited a sound much more compatible with the acoustic-stringed instruments being played at the front-porch jam sessions she loved to attend. She realized her feet were like a pair of percussion instruments and spent the next 30 years developing her own personal flatfoot style to compliment the old-time and bluegrass music being played all around her.

“Where I grew up in Sumner County, Tennessee, Johnny Cash and Roy Orbison lived right down the side of the lake,” says Rebecca. “And Bill Monroe played at the nightclub behind my house every Wednesday night. I was truly blessed to be constantly immersed in the country, old-time and bluegrass being played by the best pickers in the world.

But Rebecca also feels she owes a great deal of her personal flatfooting style to the abundance of African-American music and culture in the southeast. “I got into clogging at about the same time The Sugarhill Gang came out with ‘Rapper’s Delight’. To me, they are forever intertwined. Everybody in the fifth grade was obsessed with learning all the lyrics to ‘Rapper’s Delight’, me included. And it didn’t take long to figure out that hip-hop and flatfoot go together like bread and butter.”

As an elementary school student in Crisp County, Georgia, Rebecca spent every recess locked into rhyming and handclapping games with her schoolmates.
“We were always playing rhythm games and making up jump-roping rhymes. It was inevitable it’d somehow seep into my flatfoot routines.”

As a professional singer, songwriter and rapper, Rebecca considered clogging, flatfoot and percussive dance something she did just for fun: “You know, like hula hooping. You show up at a party, the music sounds good, so you start to dance!”

It wasn’t until she moved to Southern California in 2003 that she realized her calling as a teacher. “People had been suggesting I teach flatfoot for years, but I didn’t think of it as a unique skill while living in the southeast. It’s so common there and so many folks are familiar with it that it just seemed like old hat. But when I moved out west, I realized what a special gift I was given to have grown up immersed in such deep culture. Now, I feel it’s my legacy and responsibility to keep this tradition alive by passing it on to people wherever go.”

And so, while she currently sings, writes and performs for a variety of groups and projects — including Los Angeles-based, Eastern-European women’s choir Nevenka; silky-smooth, lounge- pop ensemble Vermouth; her own music projects including Hendersonville Song Company, Baby Stout and the occasional musical theater project, Rebecca gives percussive dance its own spotlight as a serious art form. “It’s not just a trick anymore; it’s my heritage, and I’m just so proud and excited to share it with the world.”